Lesley Macniven is the lead reader who helps to run our Creative Writing group at Paisley Library.

A recent issue of Unbound mentioned the Open Book Creative Writing Group that started in Paisley Library in September 2019. The group’s story is itself quite a page turner, so we wanted to share some highlights from our eventful first year.

When I first set foot in Paisley Central Library my first task was to navigate the double door entry system, while carrying a portable flipchart and various literary materials. The entrance is very effective at keeping rain out of the book-filled building, a rather elegant portacabin being used while the main library undertakes a refurbishment. It is not so effective at enabling a speedy entrance. So always arrive in good time for the group if you plan to join us.

Paisley itself was undergoing something of a cultural revamp, thanks to a dividend from its application to become a City of Culture in 2021. There was an expectation that wider untapped creative talent lay hidden away in Renfrewshire, in the shadow of Scotland’s largest city.

I was joined that first day by five women, who I was relieved came back again the next month, and soon became regulars. 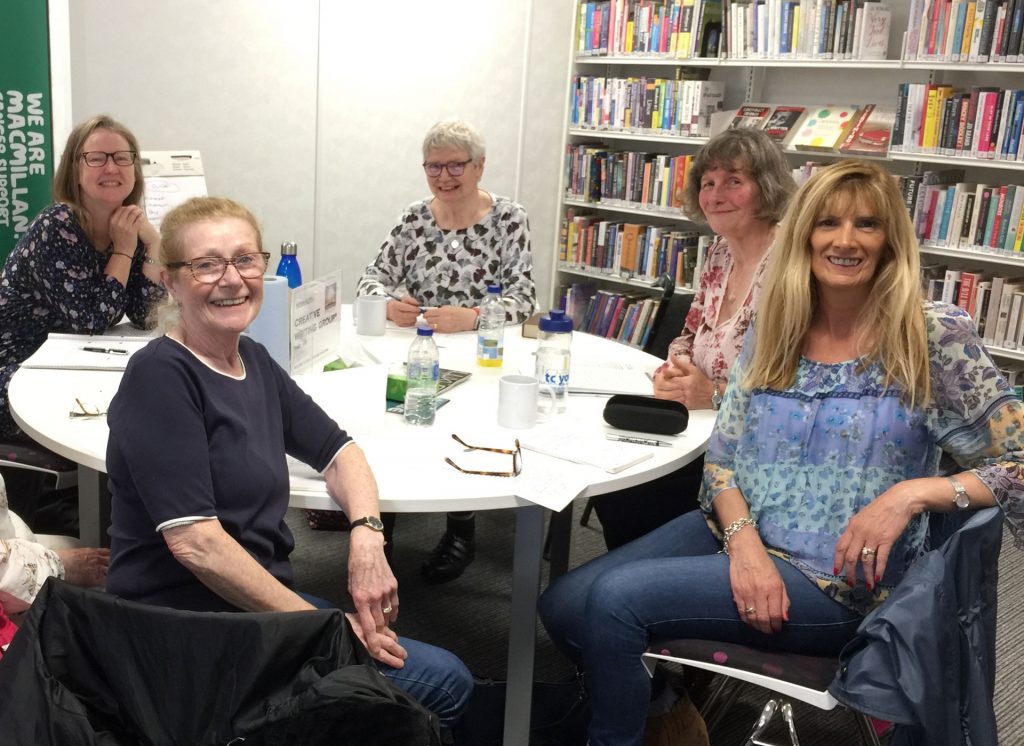 In subsequent weeks others joined the group, as and when they could, and were always made very welcome. We settled into an average group of 6 or 7.  The lovely library staff spoiled us with tea, coffee and biscuits during our break, when we all enjoyed a blether about what we had been up to. It was a very amicable, encouraging and supportive group.

We started to share what we had been writing in between sessions, while assuring newcomers it wasn’t essential to write 10 Chapters of the book you had planned but never started, within your first 3 months of joining (though one of the group did). Various local competitions were entered and occasional pieces of work shared. However, the focus was on using that time to limber up our creative minds and produce and share work based on the monthly theme.

That first session, no-one would have believed that in a matter of months they would take to the stage in the Paisley Arts Centre and perform their own work, beautifully, to an appreciative audience.

Fellow Open Book Lead Reader Jess Orr is also Co-Producer of the brand new Paisley Book Festival. Chatting at an Open Book gathering, before we started our new roles, we agreed we should ‘do something’ together.

I shared with Jess how well the group was going and we decided to hold our February Open Book Creative Writing session during the Festival, at their main venue. We were given a fabulous room, appeared in the official brochure and so attracted lots of new people, keen to give Open Book a try. We gave them the opportunity to sign up to read their work at a further event that evening. One lady even wrote afterwards to the Paisley CEO to share that the Open Book session was a Festival highlight. A great day was had, writing to the theme of Radical Voices and Rebel Stories.

I was delighted to host an Open Mic event for the Book Festival team that same evening. We had been reviewing the work produced in the group and encouraging group members to sign up in the preceding weeks. On the night we showcased work from a dozen local writers. Three original members, two more regulars, a new recruit who read a piece she had written that morning in the group, a couple of local writers and an audience member who spontaneously read a piece in the closing slot. Other group members and our Paisley Library hosts, Joyce Higgins and Linda Flynn, came along to support along with a good-sized audience of festival goers. 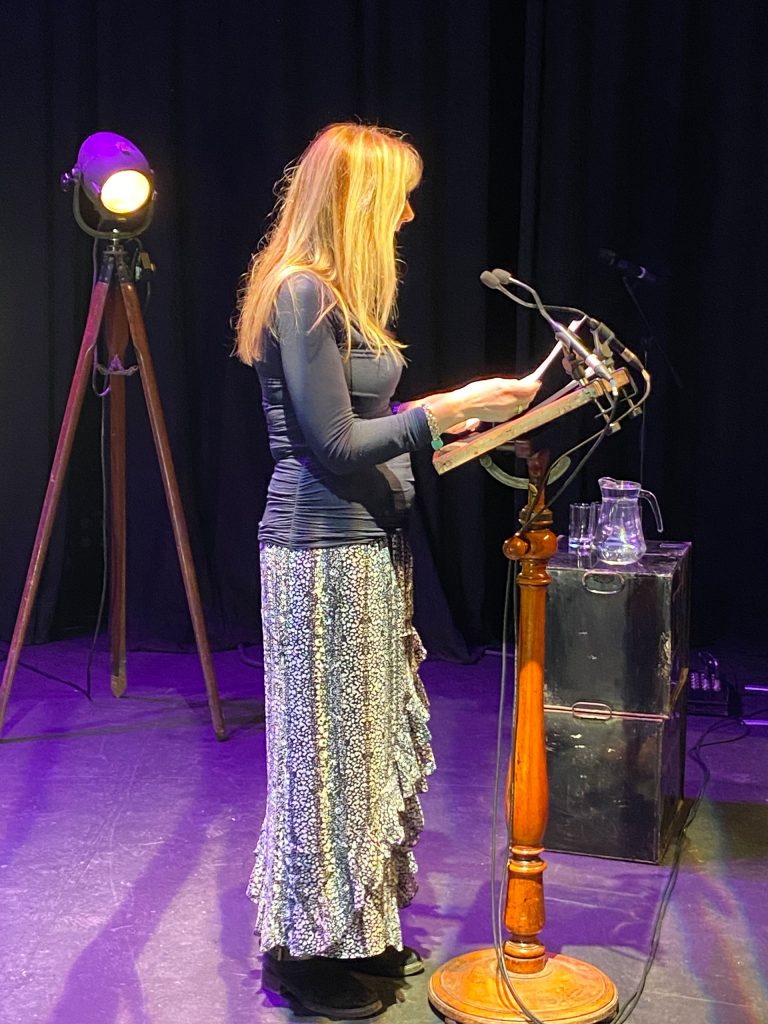 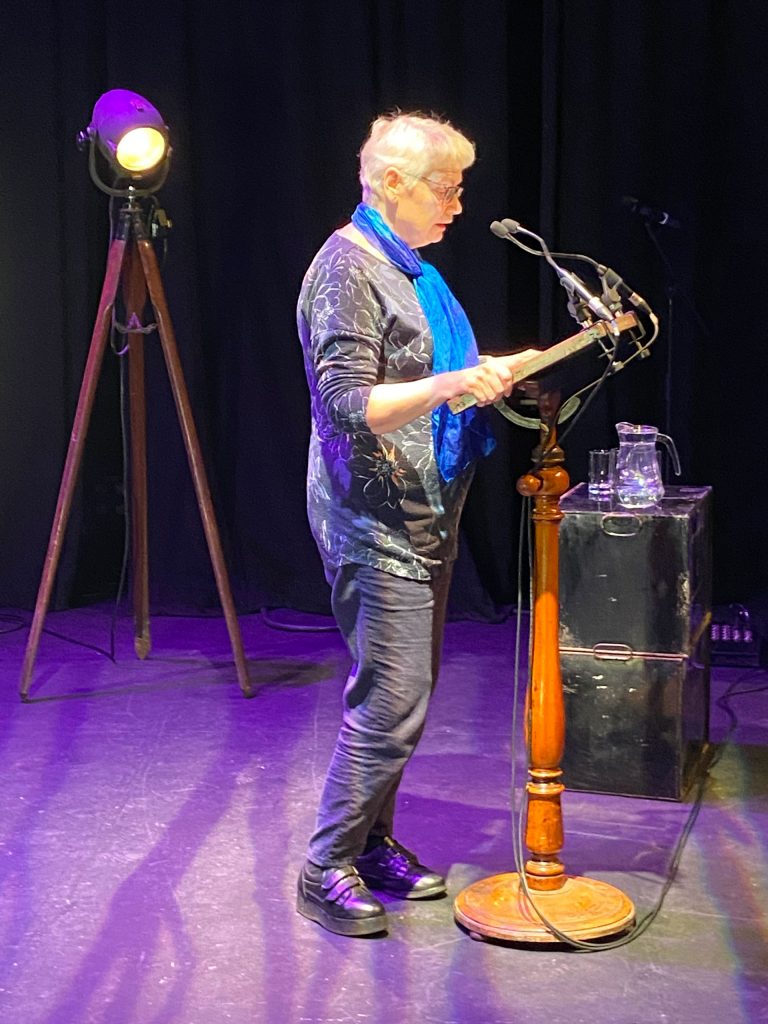 The group also embraced the wonderful Open Book opportunity of an outing to attend a Book Festival event, seeing the legend that is Janice Galloway be interviewed by Kirstin Innes. We read her work at the meeting before, asked her questions and got a lovely reception when we pitched up to have our copies of ‘Jellyfish’ signed. 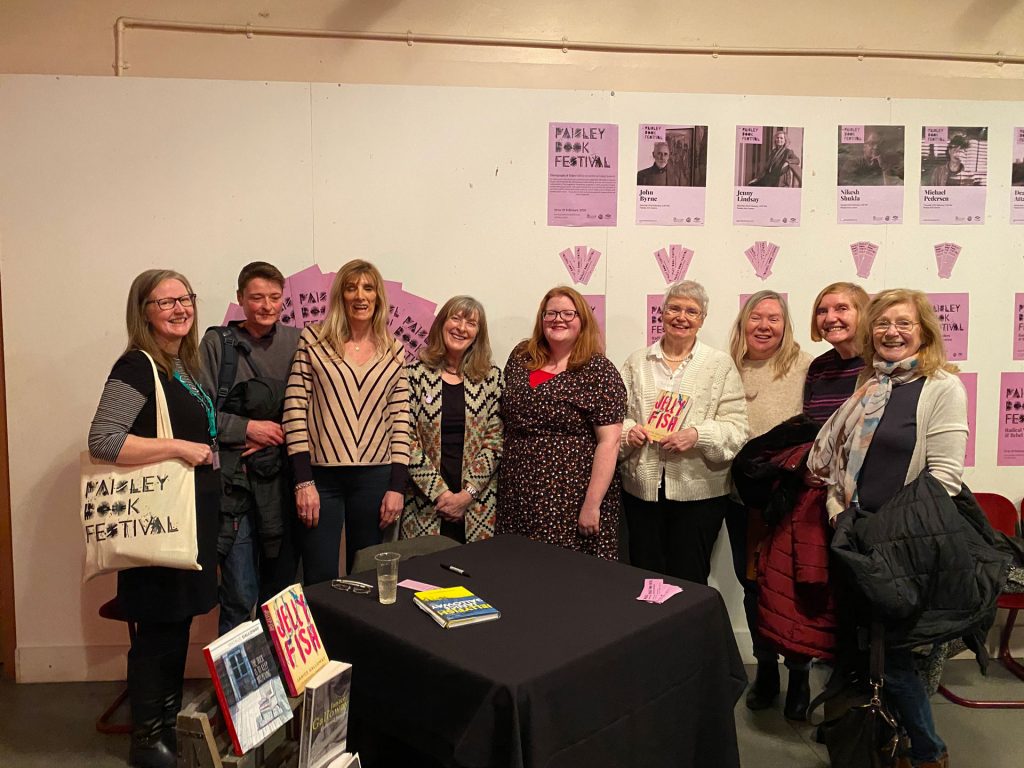 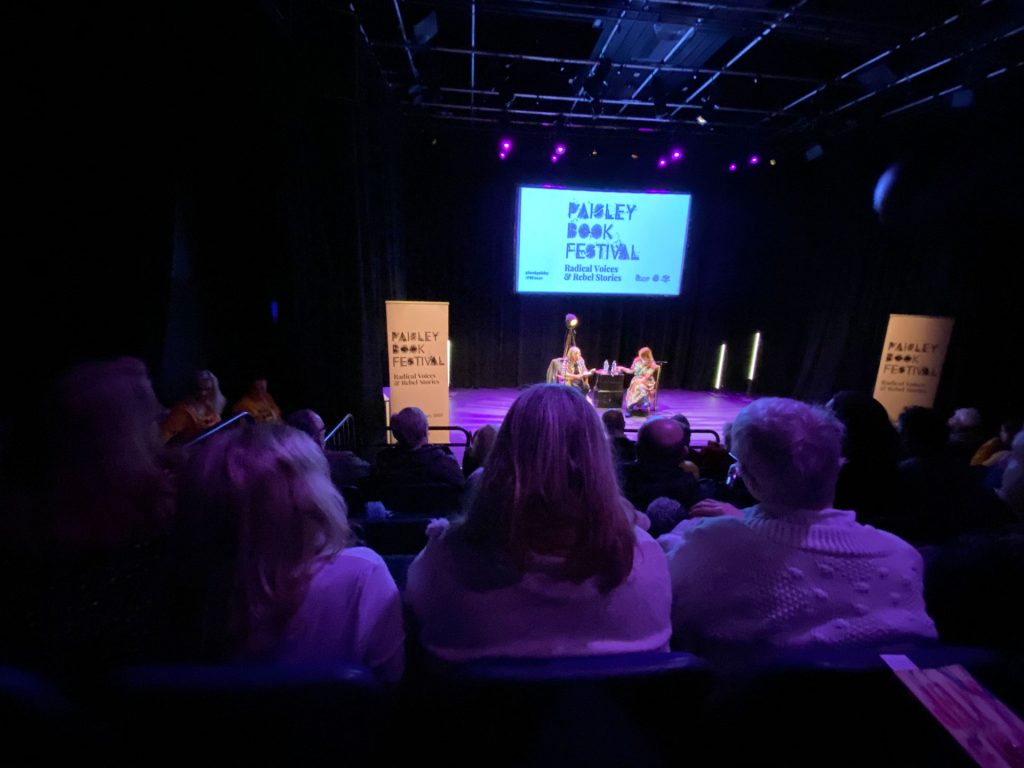 We all know what happened next. In March we had a Covid-related hiatus. Then Open Book started on Zoom and in April we decided to give it a go, had a great blether as always and produced some wonderful work, in the time of lockdown. A new Paisley Library shared reading group has also started online over the summer, which is running fortnightly on Wednesday mornings, led by one of the librarians, Ann.

Covid-permitting we [*hope to] regroup later this year, but will get going again on Zoom if need be. We are becoming way more tech savvy these last months. I’ll miss the tea and biscuits, but at least I don’t need to (wo)manhandle a flip chart through those doors on Zoom.